I went to LACMA today see see a few amazing exhibits before they closed.

Sum of Myself: Photographic Self Portraits from the Audrey and Sydney Irmas Collection. A very sexy self portrait by a young Alfred Stieglitz The exhibit also included an incredible installation by including Natalie Bookchin Testament, by Natalie Bookchin
From her site on the project:

“Testament is a series of collective self-portraits made up of fragments from online video diaries, or “vlogs”. Chapters focus on a collectively told vignette, story, proclamation, or meditation on topics such as identity, the economy, illness, politics, the war, or work. Testament explores the formal and conceptual consequences of online video viewing and sharing, while analyzing contemporary expressions of self, and the stories we are currently telling online about our lives and our circumstances.”

interestingly while surfing random topics and blogs I also ran across a quirky vlog that lead me to a random string of “coming out” vlogs on YouTube. I rarely watch stuff on you tube but I ended up watching several of these. I was really moved. Amazing stuff!

One of the other exhibits that I spent time in today was an exhibit of still life’s by Luis Meléndez. The traveling exhibit was organized by the National Gallery in Washington D.C. 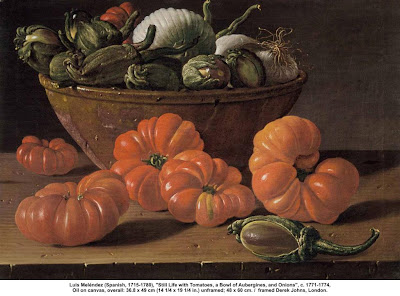 It was really a treat to pour over these canvases. Every detail was stunning. Also the objects he used in the paintings were interesting to scrutinize… like the ceramic water jug and the copper containers, and wooden boxes. The surface of the paintings were as lush as the composions. One the things I enjoyed most were the flaws he added to the objects and foods. little imperfections that gave them a startling realism. The New York Times reviewed the exhibit and observed:
“What is captivating is the near-photographic verisimilitude. The leathery grain of a cantaloupe hide, the gleam of copper pots; the spongy insides of a broken bread loaf, the dull grain of old wood, the transparency of glass: everything is seen with a near-microscopic attention to detail and rendered with an almost imperceptible painterly touch. Light and color are often realized with astounding vividness. Piled oranges and gnarly yellow pears glow as though lighted from within. A picture bathed in cool morning light, with eggs in a basket, a tin funnel and a brass pot, boasts front and center what might be the most beautiful head of cauliflower in the history of art.”
“The series was to represent the four seasons, as the artist described it, “with the aim of composing an amusing cabinet with every species of food produced by the Spanish climate.” A self-portrait by Luis Melendez

The exhibit New Topographics is of particular interest to me. This exhibit was originally an exhibition curated by William Jenkins at the International Museum of Photography at the George Eastman House in Rochester, NY, in January 1975. This was first exhibit to reassess landscape photography and to reexamine the concept and definition of “Landscape.” In recent years this has become a much more popular area for artists to explore. LACMA’s restaging has it’s own update, but mostly in the form of books on view and one installation by Edward Burtynksy. I grew up in a rust belt town, Hopewell Virginia. I was always fascinated by pipe cities and the smoke stacks that billowed out white smoke all day and created an eerie reddish glow at night. The original town was leveled in the early 70s and what was left was an awkward mish-mash of parking lots, ill positioned fast food restaurants and car dealerships.
the tight knit immigrant lead community collapsed over the decade and poor municipal management left the city a virtual ghost town ringed with malls and franchise ghettos. It wasn’t until I moved to the west and was overwhelmed by the majestic natural landscape that I realized what a violation towns like grew up in had become. I started looking more critically at the space around me… and my definition of landscape broadened considerably. I was excited when I saw an exhibit from the 70s, when I questioned my own ideas about what was and what wasn’t landscape, that others were asking and exploring these same questions too. It was an important validation. In college I started photographic local industrial ruins, intersections of urban development and nature, and more closely the surfaces of some of these spaces.
I’ve become interested again in landscape photography in recent years… and particularly fascinated by new work being done and a wide array of artists who are able to travel with their discerning eye to capture an emerging picture of the radically transforming landscape around us.

This exhibit was a great introduction to the first ways artists began to rethink landscape in the face of the spread of human habitation and development.

More on this subject soon.